Linda Matthews is working as a full time professional artist and tutor for over 20 years, in the United Kingdom. Recently Linda has relocated to Autignac in the south of France, her studio is open sur RDV. She is now a member of  La Maison des Artistes of France with  Officiel N

umber 32823
For seventeen years she had a studio gallery in Norfolk in the east of England.
Inspired by everything around her, preferring the freedom of painting from life, en plein air in the countryside, her philosophy is “Wherever you look there is inspiration”.Happy to consider commissioned pieces, her work is in private & corporate collections worldwide, and has been selected for exhibition at the Designer & Artists Copyright Society in London. 2020 two of Linda’s works were selected for exhibition at the European Council in Montpellier for 16ieme “Semaine de les Peintres” 2019 her painting “Les Villemagnais” was awarded second place at les Artistes dans les rues at Villemagne d’Argentiere September 2018 her painting “Un Coin Tranquille, Coulobres” was awarded first prize at the inaugural “Artistes dans les Rues” in Coulobres July 2016 one of 90 artists selected to paint at Windsor Castle for Her Majesty the Queen’s 90th birthday, Linda’s painting “Cornets & Bayonets” was awarded second place. A qualified tutor, Linda has written for for Leisure Painter Magazine & led courses for Artist & Illustrator Magazine. As well as her own holidays and workshops, working as an associate tutor for the Field Studies Council for twelve years, Linda teaches on cruise ships and works with other private painting holiday providers. In the UK she has appeared in local & national press as well as on Radio & Television… 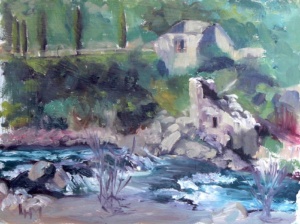